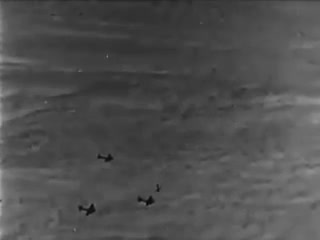 "This film explores how and why the World War II shuttle bombing of Germany from England, Italy, and Russia began. The footage features B-17s, B-24s, and P-51s as well as other military aircraft. Also included are scenes with Lieutenant General Ira C. Eaker, Commanding General of the Mediterranean Allied Air Forces, and Major General Nathan F. Twining, Commanding General of the 15th Air Force, among other high-ranking Air Force officers of World War II."

From Field Manual 21-7 List of War Department Films, Film Strips, and Recognition Film Slides 1946: "G. I. Movie Weekly. (1) Purpose. "G. I. Movie Weekly" provides 45-minute programs of education, information, orientation and subjects of general interest for free showing to troops throughout the world. It is the 16-mm film medium for imparting such programs directly to military personnel both within the continental limits of the United States and in all oversea theaters on a regular weekly schedule. Shown in recreation centers, service clubs, out of doors, and at other improvised locations, "G. I. Movie Weekly" is presented informally on off-duty time, under the favorable psychological conditions which surround voluntary attendance.

Adam Kendellen - Last Of Us