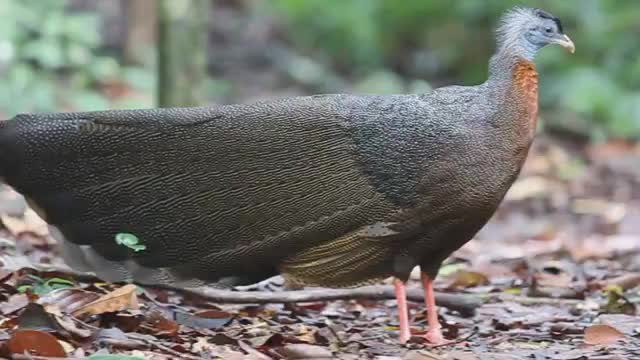 Emerging from the Selamba trail, Faezen spoke on his walkie-talkie and marched us quickly down the road to the Hornbill trail. His friend, another guide, had found something we should see. In-sight of that guide, who stood looking through his camera on a tripod, we walked slowly and silently to him, my eyes were drawn to movement in the trees, but that’s not what he was looking at, that was red leafed monkeys swinging away. Instead, magically, he was transfixed on an enormous bird stood in the middle of the trail. It had a blue head with a silver mohican, a golden brown chest and enormous spotted feathers reaching out behind — like those of a peacock. It was the elusive and rare Great Argus, a bird I’d read about but never dreamed of seeing. In the clearing the Argus was tidying away the dead leaves, preparing a space to dance in, to impress and woo a female. The mating call is beautifully simple, a two-toned caw, unmistakeable. For a wonderful 45 minutes we stood and watched the bird, waiting and hoping that it might dance. A few times it looked like he was about to start, he ruffled his feathers and hopped, but then resumed tidying. He had an audience, just not the one he wanted, and despite his caws no female ever came. This was without doubt one of the most amazing things either of us had ever seen, unforgettable.

Foolish Cat Running Round And Round

Spider and Its Prey

When A Monkey Receives A New Water Bottle

Hilarious Attempt Of Fat Cat To Roll Over

When A Lion Stops The Traffic