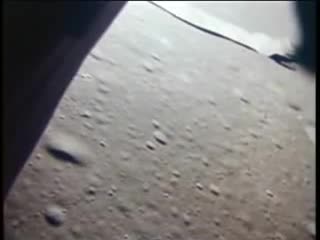 Apollo 15 Landing on the Moon

16 mm film shot from the Lunar Module Pilot's window during the landing of Apollo 15 at Hadley Rille. Starts at about 5000 feet above the surface.

Apollo 15 (Wikipedia):
Apollo 15 was the ninth manned mission in the United States' Apollo program, the fourth to land on the Moon, and the eighth successful manned mission. It was the first of what were termed "J missions", long stays on the Moon, with a greater focus on science than had been possible on previous missions. It was also the first mission on which the Lunar Roving Vehicle was used.

The mission began on July 26, 1971, and ended on August 7. At the time, NASA called it the most successful manned flight ever achieved.[2]

Commander David Scott and Lunar Module Pilot James Irwin spent three days on the Moon, including 18½ hours outside the spacecraft on lunar extra-vehicular activity (EVA). The mission landed near Hadley rille, in an area of the Mare Imbrium called Palus Putredinus (Marsh of Decay). The crew explored the area using the first lunar rover, which allowed them to travel much farther from the Lunar Module (LM) than had been possible on missions without the rover. They collected 77 kilograms (170 lb) of lunar surface material. At the same time, Command Module Pilot Alfred Worden orbited the Moon, using a Scientific Instrument Module (SIM) in the Service Module (SM) to study the lunar surface and environment in great detail with a panoramic camera, a gamma-ray spectrometer, a mapping camera, a laser altimeter, a mass spectrometer, and a lunar sub-satellite deployed at the end of Apollo 15's stay in lunar orbit (an Apollo program first).

Although the mission accomplished its objectives, this success was somewhat overshadowed by negative publicity that accompanied public awareness of postage stamps carried without authorization by the astronauts, who had made plans to sell them upon their return. Ironically, this mission was one of very few that had been honored with the issue of a commemorative US stamp, with this first use of a lunar rover happening one decade after the first Mercury astronaut Launch.