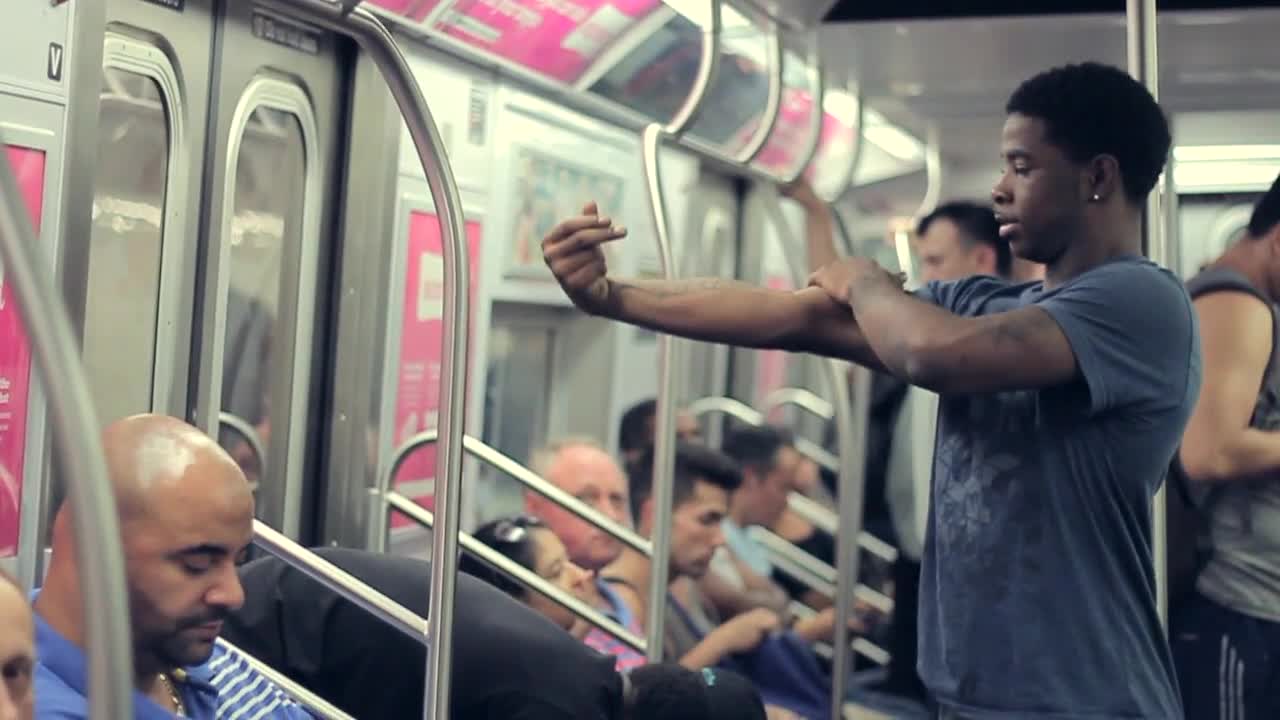 Having spent two months in New York this summer, I rumbled through various subway stations on the trains to'ing and fro'ing from place to place. I saw, like the rest of New York, the familiar faces; the commuters scurrying onto the trains anxiously in the AM and moping back on, sweaty and tired in the PM, the beggars and the homeless pleading for money, shaking their cups, the young and old puerto rican families, the macho builders finishing their shifts earlier in the day and loudly bantering and the drunken partygoers falling in and out of the doors and sleeping through their destinations.
It was a few weeks into my trip I first experienced the subway dancers. To us tourists, they're often a group of young (between 7 and 21 year old) boys who get on the train with their speakers blaring, jump skip and dance around the carriage using the rails as their apparatus, they then ask for donations and off they go onto the next train. It's fun, exciting and gives you a taste of the real New York hustle - however it seems to most of the local residents, they're more of an annoyance, disrupting the peace and bothering passengers.
I was fascinated by them. The sheer body strength and skill it would take to begin to dance like that is so admirable in itself, I couldn't fathom the idea that it would bother anyone - surely we should be praising these kids for their sense of earning and defying the usual portrayal of groups of young males?! I slowly began to notice where and when they operated - my favourite group always seemed to be on the train between Union Square & 14th and Bedford Ave - so I went back to talk to them. Although a little apprehensive at first, they warmed to me as I spoke to them about what I do and turned out to be incredibly friendly and welcoming. We arranged a time and place to meet the following morning and what was going to be a few hours of interviews turned into me following them for two days on the trains.
The longer I spent with them, the more I realised that they weren't dancing as a hobby or to earn a couple of bucks but a lot of these kids actually needed the money to support either themselves or their families. A lot of them come from poorer backgrounds and areas like Crown Heights and East New York and have bonded over a mutual decision to earn money through something more positive than gang banging, drugs or stealing. What's more is that dancing on the trains is currently illegal in the New York state. The boys told me about several friends who had been arrested for this harmless and unifying activity.
In short, these were some of the most inspiring people I've ever met. Aside from some of the more tragic back stories, the dance they've created and called 'Lite Feet' is phenomenal to watch. My experience with W.A.F.F.L.E (We Are Family For Life Entertainment - the name of the dance group) was short lived and left me wondering about their lives out and beyond the L Train. These kids have created an underground community of young dancers all looking for a similar escape from reality. Hopefully, the train officers can be more forgiving and some of the grumpier commuters will reconsider before they slate these dancers. As they say so appropriately at the end of each dance "Show your love and show your support". What they do is absolutely amazing.