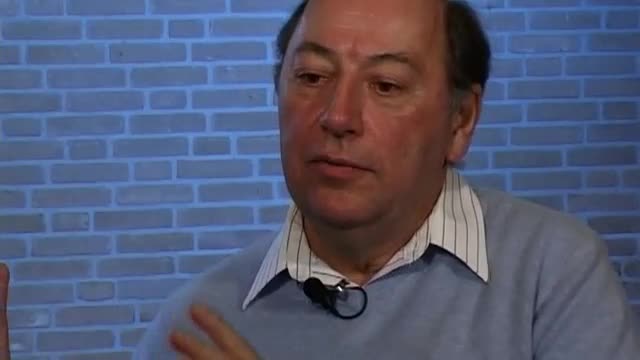 There are certain marker events for the cultural creatives. What the planet first looked like from space is an icon. Right? Now at this moment we may think, “Oh, is that not just kind of boring,” but at the time it appeared it was utterly thrilling for the first time to say, “Oh, my God, there are no lines of national boundaries on the picture of the planet from space.” But what came later, were the satellite photos showing how much of the Amazon was being devastated. This is the lungs of the planet, and it is being destroyed, burned off at an fantastically fast rate. That is one.Another moment that is terribly important, is when Martin Luther King picked up from Gandhi the peaceful non-violent resistance to bad things that has become a standard now for non-violence in all the different movements, and often the news media say that a good protest is a non-violent, morally superior protest as opposed to the old kind of violent protest. We are looking at a watershed appearing where we are demanding a certain kind of morality in public life.Another watershed was when Rachel Carson published the book ‘Silent Spring' in 1962, which was essentially bringing forth the idea of environment. ‘Silent Spring' said, “If the bird and the bees and the frogs around the pond die, your children will die.” This was not trivial. Suddenly people who had been hearing about preserving pretty areas and keeping pollution out of the rivers in their backyards, got a very different idea. “My children are going to die, now this is serious, we have to do something about it.” So ‘Silent Spring' was a pivot point, when the environmental movement suddenly took off, in terms of influencing people. I am not talking about being politically succesful, but in terms of influencing people, the environmental movement is the most successful social movement in history. At this moment in time around the entire planet, from 70-90 percent of the people, even in illiterate peasant areas, believe there is an environment, that there is a planet which is in trouble because the environment is in trouble. It is just stunning. It does not matter what country you do the survey in, people know that there is such a thing as an environment and it is in trouble and something ought to be done about it. Now that shift in perception and world view is just fundamental. Have the politicians agreed? No. There is too much money coming in from big business to counter that, but the whole perception of the population has shifted and you can point the finger precisely to the moment when it started, with ‘Silent Spring'. And that got made into a TV series and all that.Interestingly, the same year as ‘Silent Spring', Betty Friedan published ‘The Feminine Mystique'. So the women's movement which had started with women's voting rights a century earlier and had gone to sleep then, started waking up again. The key thing about ‘The Feminine Mystique' is that this was the starting point for women saying that people need to be authentic, you need to show who you really are and you need to really bring forth women's concerns into the public. When I say cultural creatives are taking women's ideas and emotional concerns and bringing them out into public life for the very first time, that again started right there with ‘The Feminine Mystique'. So you can often point to very precise things.The Battle of Seattle, the World Trade Organization protest in Seattle in – what year was that? 2000 or 1999? – anyway, the Battle of Seattle was the first time that 20 kinds of movements came together and shared a protest, and they got the whole thing organized in a very short period of time for very little money, and it was very effective, they just shut down a power grab by multinational corporations who were trying to change the rules of the environment and of trade, and overrule governments in the name of corporate hegemony, and that was a fundamental shift. When the movements discovered that they liked each other, that they were not separate after all, that they all shared not only the same values, but when they worked together it was just fine, and at the same time they learned to use the internet to mobilize very rapidly very successfully. And that has been copied ever since, by Porto Alegre movements and so on. That is part of a fundamental shift, where you see technology moving and then the perception of “oh, we are all in this together.” They discovered fog has gone, mountain range is there. All these movements are one big thing. So that moment of discovery was partly the Battle of Seattle and partly the Porto Alegre people following through, saying, “Yes, a new world is possible.” When Porto Alegre people said “a new world is possible,” that was a moment of empowerment not around pushing away bad stuff only, but also where do we want to go? What do we want to create together? And that is a major shift.