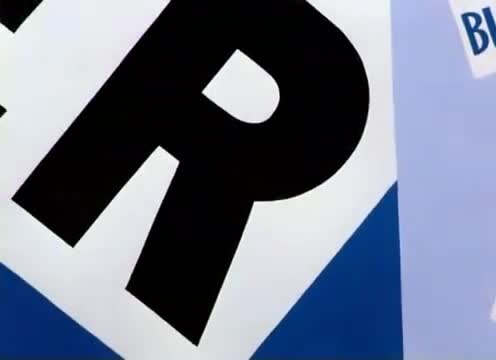 A bald-haired magician named Ala Bahma is nailing self-promoting posters on every conceivable surface, including a tree in which Bugs is living. He protests having his home encroached and his right to private property compromised, until the magician apologies and offers Bugs a blackberry pie. The rabbit's expression momentarily changes to joy as Ala Bahma magically brandishes a blackberry pie from underneath his cloth, which splatters in Bugs's face. As the magician walks away saying "What a dumb bunny!", an enraged Bugs decides that it is time for revenge and says his famous line: "Of course you realize, this means war!" Bugs exacts his revenge through a series of public humiliations at the Bijou theater, where Ala Bahma is performing. First, Bugs replaces himself with a carrot during Ala Bahma's hat-trick and gets into his outfit. Despite Ala Bahma's objections, Bugs decides to help the magician. He goes into his hat and repeats Ala Bahma's hat trick and accepts brief applause. Bugs gets into Ala Bahma's hat, kisses the magician and ties up his mustache. When Ala Bahma unties his mustache, he sees a sign posted by Bugs to tempt him with a carrot. Next, Bugs grabs Ala Bahma's mallet and hits him as he grabs the carrot and eats it. Ala Bahma puts his hand in the hat, only for Bugs to pull the magician in. As Bugs is dancing, however, Ala Bahma grabs Bugs and after they fight off-screen, Ala Bahma barricades his own hat with wood plains and nails to make sure that Bugs does not get in. Later, Ala Bahma does his Indian Basket Trick performance with Bugs posing as a volunteer. During his trick, he puts the knives in the basket. When Ala Bahma discovers that Bugs has reappeared from behind him, Bugs runs and attempts to jump into his hat but hits it on the barricade. Ala Bahma charges at Bugs to kill him, but Bugs plays his statues game on the magician. Once Ala Bahma gets close enough, Bugs dresses up as a fencer for Ala Bahma to fight him. Bugs escapes to the balcony to heckle Ala Bahma. Realizing that he has been tricked, Ala Bahma uses a shotgun and fires at Bugs. However, Bugs appears from Ala Bahma's hat and places a cigar in his mouth, which promptly explodes. After kissing Ala Bahma, Bugs brandishes his own blackberry pie. He says to the audience, quoting Red Skelton's "Mean Widdle Kid", "If I dood it, I get a whippin'...I DOOD IT!" and splatters the pie in Ala Bahma's face. Bugs ends his performance with "Aloha 'Oe" on a ukulele as he descends into the hat.
Published 1942

Bugs Bunny: All This and Rabbit Stew

Up In The Clouds

AniMat’s Reviews: Rise of the Guardians