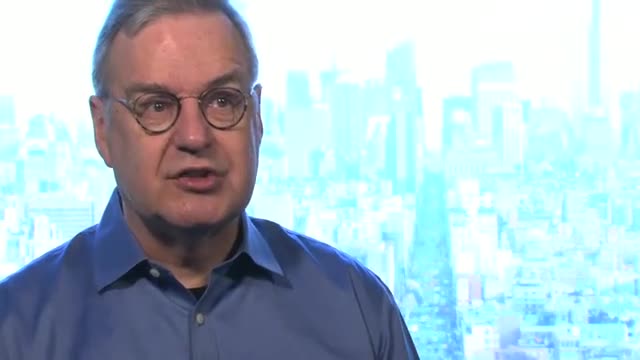 Traditional media companies have responded to technology traditionally in the same way you might imagine that if we were sitting in a cave millions of years ago, huddle in the darkness covered by our furs and one of our extended clan, which might be 30 or 40 people, comes walking in, and he has a stick. At the end of the stick is this thing he's now calling fire. And we would go... The first reaction that we'd have as he comes in is not: "Oh, this is great. This is how we can warm ourselves up." The first response we would have would probably be: "How do we get out of here? How do we escape this thing? How do we suppress this thing?" There is no sense that it was... I'm sure there was no sense that this was the most exciting thing that would ever happen, that we could now warm ourselves, we can now cook our meat, we can do all these things that would lead to all these things. I'm sure the first reaction was complete fear.
The first phase most media companies have had towards, I think, technology in general, has always been: "It's going to change our business model. We don't want to change our business model, because it's making us money. We can predict it. We can understand it. We know how to finance based on that. We don't want to hear about this." So piracy was always the big thing that they jumped up with and said: "This is what we're going to fight, because we don't want our consumers being able to pirate our content."
So, actually the process led to them having a consumer adverse kind of strategy. Which on the one hand they have customers and on the other hand they don't really care about them. That was the message they kind of communicated. Because at that point they didn't understand it, or they didn't want to understand it. Some of that is still residually felt within the entertainment industry. Some of it is changing. There are smart people who are trying to figure out how to change that. The big change is something, I think, Clay Shirky and other people have pointed out, is that the consumers are settling in charge in a way that they never were. Because now, instead of a one to many kind of system, now you have a many to many kind of system. And so this is expressed not only in the ability to do peer to peer sharing of media that you may accumulate that may be pirated or may not be pirated. But now it's also the ability to share and create content across this whole service of platforms. That's a paradigm that the studios and networks are completely unaccustomed to. And I think they have to adjust to understand how... They now have to listen to their consumers in a way that they've never had to before. But if you really drill down to understand the entertainment business, my belief is the entertainment business has never been a consumer facing business in a direct way. They've always been... If you look at the classic studio model, what they do is they manufacture products and they basically license it to other people who send it out to the consumer. Now they need to deal with the consumer directly and now they're having to learn a new skill set that they've never really had before. And a new skill set beyond that, which anybody who's in a consumer business has to deal with consumers in a way that they've never anticipated. Because I think the most extraordinary thing in the last two or three years is really about the rise of social networks. The rise of status updates, the rise of the real-time web, and that combined with connected devices has created a kind of... If perfect storm is not the word, I'm not sure what it is. This kind of maelstrom of ways that consumers interact with content, which is completely new and unexpected. Even 3 or 4 years ago, when certain ways... Especially the social element.
If you take all those elements together, studios now have to rework how they can relate to consumers at the same time that the ecosystem has been built up over the last 10, 20 years to guarantee cash flow through them, now coming back to the MSOs, which I talked about earlier, is under attack. And so, if that ecosystem starts to be transformed, they have less likely... They have less cash flow to depend on, so now they have to really work with the consumers directly. So it's... I sometimes think that if you want to be in the entertainment business today, or if you want to be in the media business today, the best preparation is probably the study of biological ecosystems. Because what's going on is really the complex changing of a very complex environment by the introduction of new species or new tools that some people predict will change everything over night. My belief is it won't change everything over night, but it will have an impact on the system, so the ecosystem will readjust to it. And that's what's hard to predict in the future, because ecosystems take time to change and adapt. And the old doesn't necessarily disappear. It just gets reformed. And that's what's going on today, I think.

Stretchy Scarf And Do Any Style