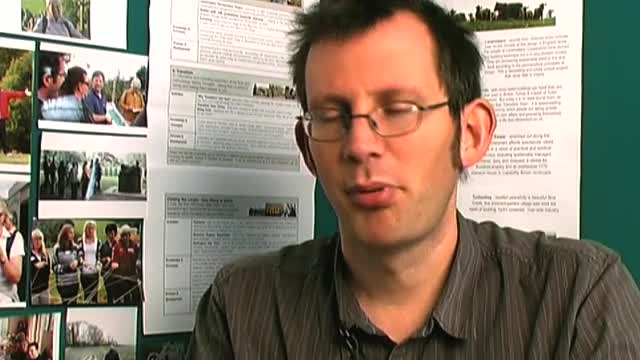 Danger of waiting for technological solution

Danger of waiting for technological solution
Click here to play the animation
Link to Page
Close
Did you know there is a Y8 Forum?
Join other players talking about games

I think we need to really acknowledge that we live in a world of limits. And we aren't going to be able to completely rebuild the world. And one of the things that we do here in Totnes, is the project called "Totnes the nut tree capital of Britain". Which is just a simple little project that works away every year, plants fifty or sixty hybrid nut or fruit trees, throughout the town, in kind of little unloved corners of the town. And it gets that idea across that actually when we're talking about a low carbon future in twenty, thirty year's time, it's pretty much going to look like it does today in terms of the fabric of the town. You know we can all those amazing computer-generated pictures of sort of space age cities and everybody flying around in solar-powered hover boards and stuff, but actually it's pretty much going to look like this. Just with more food being grown, better insulated buildings, more energy infrastructure in place, less cars.

And I think we can sometimes get quite carried away with ourselves. And also there's the temptation to think: “Well, if we wait… It's a bit like buying a computer. You think: “Well, actually, if I wait six months with buying a computer, I will get one with twice the memory for about the same amount of money.” So the best time to buy a computer, is always in about six months' time. Or a camera, or anything. So I think often we can have this temptation of thinking, the best time to start installing renewable energy infrastructure is in six months' time, because they will have come up with something much, much better. But actually we've got a lot of the technologies and we need to really just get on with it.
I think in many ways actually looking back, that period at the end of the 1970's, when we had the oil shocks of the seventies .... There was a fascinating exhibition that was on in Canada a couple of years ago, called: Out of Gas. Which looked at that period of time and the huge flowering of creativity and inventiveness and technologies that happened during that time. So ideas like permaculture, bio-intensive food production, urban agriculture, renewable energies of all different kinds, things like earth ships, passive solar building, underground houses, straw bale building, all that kind of stuff, went ‘phoomf’ during that period of the 1970's. And when we got to the end of the seventies, we had everything in place we needed really, to actually start moving on. And if we'd have chosen in 1979 and said: "You know, actually Saudi-Arabia, don't worry, you can keep it, we're going to make sure this never ever happens again, because that was just horrible, we don't want to go there again." Instead Reagan and Thatcher said: "Let's party!" And we partied for another thirty years.
But if at that time we had decided to follow that route, we had everything in place then. So technology clearly has a role, but I think we must also not lose sight of the fact that this will be a process about a lot more than technology. Because it will also be a process about moving away from what a lot of us imagined was lying ahead of us around the corner and what we imagined was lying ahead of us for our children. It's not purely an external process of just getting the right technology. Transition is really an inner process as well. Which is about becoming more personally resilient for the times that we're going into. Which is about supporting each other, friends, family, and the community around us, through times that will change quite quickly and where we'll feel we're just losing our bearings. Through times where we feel that... where there is a lot of grief about what is happening, a lot of anger about what is happening. So to purely see it as a technological process, I think, misses out on the whole human aspect of it.

Dog Helping Human With A Computer