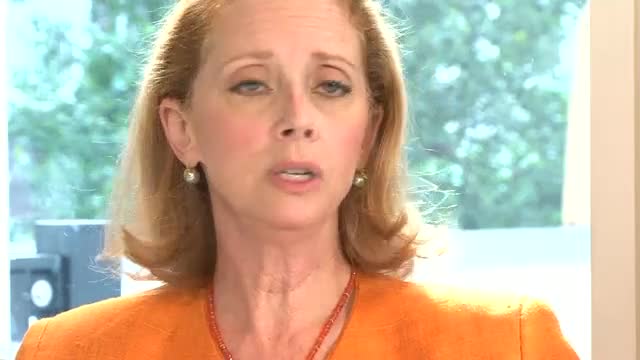 The democratization of languages is that we all have phones so we’re all able to communicate with each other. But in order to communicate with each other we do have to have some sort of common language. English has certainly been the language of business for an awful long time and I would dare say that in Korea people are not speaking English on their mobile phones. But we have a common language of emoticons, you know, we have the common language of the smiley face, the sad face, the raised eyebrows, the frowns – I don’t need to be... the emoticons so you... This is becoming universally understood iconography, which in a certain sense almost takes us back to cave paintings. But it’s 21st century cave paintings on digital technology. We also have devices that are universally bought and sold, and while there are certain accommodations that are going to be made for every market I think it goes without saying that ‘press the green button for on’, ‘press the red button for off’, ‘move the trackpad’... And now we’re getting away from that, it’s just ‘use your finger’.
So who’s looking at this and what effect it’s having on us? Are we going to lose the ability to learn how to write longhand? When I went to school we used to spend pages where we would practice writing one letter until we would get it just right, and the teacher would say ‘That’s very good, Florie. That looks very nice. Florie has lovely penmanship’. Not only do people not know how to write in cursive anymore or they’re losing any inclination to do so, but with the use of text messaging and with the use of Twitter, you know, we’re getting our communication down, not even to a 140 words but a 140 characters. Which means that when I say ‘you’ it’s not even spelled y-o-u anymore, it’s just ‘u’... ‘b’. We’re really making large changes to language, which, if you look at in the blip of an eye, because we live in the blip of an eye, in a second we’ll be gone. But what does this mean down the road? Two generations from now are we going to have young people who don’t know that there is another way? Who are going to look at beautiful penmanship and calligraphy as old-timey and a thing of the past, like horses and buggies? I wonder, and I want other people to wonder about this.
It doesn’t mean that some of the changes that are being made are not for the better, you know. I’m not a naysayer of all of it, I’m a question sayer, so that collectively as a group we can say ‘mmh, this is good, we’ll keep it’, ‘mmh, this is not so good’. You know what? Maybe we should remind people how to do these things so that they don’t die out, so that cultural indigenous dances don’t die because people are spending all their time playing games on cell phones. And so that songs don’t die because we’re too busy singing into karaoke machines, you know. We have to keep the humanity somehow.