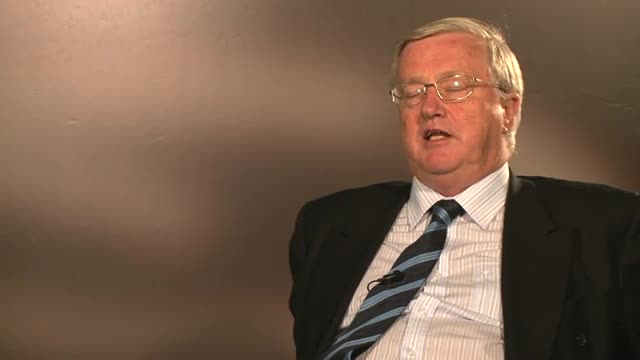 There are enormous numbers of things that we could usefully do tomorrow. We don't need a huge treaty and we don't need to worry about 2050 in order to know that if we delivered available technologies on a big scale to some developing countries, like China for example, to enable them to improve their energy efficiency, we would make a massive impact on the emissions and threats to the climate. And you don't need a new treaty, and we don't need targets agreed for 2050 in order to act. We could make knowledge available, we could make technologies available, we could do all sorts of clever things right now, that there is no reason why we don't do it.
Like equally I made the point at the beginning, that you're going to resolve climate if you don't do something about ecosystems. There are countless things we could do to preserve and recover degraded lands, to reduce deforestation. We don't need a complex treaty and ratification and five years of argument before we do that. We could do that tomorrow.
So my suggestion would be first of all to make a distinction in Copenhagen, between the things we can do tomorrow, and the things where we actually do need to have binding targets and treaties and legislation and all this stuff, which takes a very long time. So that's a very simple point. And if you believe what the scientists are saying, which I do, you know that climate is accelerating, that it's non-linear, that it's in danger of going over a tipping point where feedback loops will drive the thing, and then if we cut emissions after that, it won't make the slightest difference. So we don't have a long time to play around. So if we could start acting immediately, that would be very wise.
The second thing is that the problems of climate change are impacting now, notably on poor people across the planet. You don't need a new treaty to know that you can help these countries to adapt to these consequences right now, and we should be. And that's a part of the broader concept of international development assistance, it has humanitarian implications, etcetera etcetera. So if we wanted to, we could act on that right now.
But remember that we live quite happily with the world, a 66 trillion dollar economy, in the world, where 2.4 billion people live on 2 dollars a day. And 1 billion live on 1 dollar a day. So the short answer is we frankly don't care. We do a small amount, we deliver maybe a 100 billion or a 110 billion in development aid, and we think: Okay, that's the best we can do. The fact is, we've learnt to live with massive poverty and deprivation, and it doesn't upset us very much. So why would we worry about the impacts of climate change when we don't worry about the problems that are there already? So there is a huge ethical problem under the surface of all of this.
But I would say, to answer your question: Get going on technology, transferring everything you can. Education: to build up the capacity of these countries to solve their own problems, you don't need a treaty for that.

Phone Car Navigation - The Death of your PND