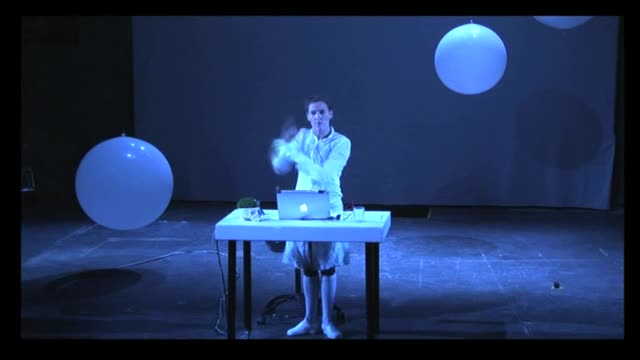 We are at Dr. Maybe Darlings Lab,
BRAVO! You have reached your Brain.
I would like to inform you that our conversation is being recorded due to security reasons.
If at any point, I say something wrong, say “wrong”
Dr.Maybe Darling
Premiered at Benaki Museum in Athens, Greece - 2010

“How has technology with the rapid increase of alternatives affected the function of our brain? Are constant dilemmas (indecisiveness) a contemporary social phenomenon? Do we live in times where thinking is in action but action has no action?”
“Dr. Darling” is getting ready to give a lecture on the challenging issue of the decision-making process. The lecture begins, Dr. Darling is confronted with conflicting opinions of scientific and other nature and she crashes. She decides to exam herself. She names herself “Maybe”. Dr. Maybe Darling attempts to be the scientist and the guinea pig at the same time.
Dr. Maybe Darling is a performance that combines image, movement, speech and technology. Although Solo Performance, the video (live feed and pre-recorded material) and the speech (live and pre-recorded) are playing a +protagonist role being in a constant dialogue with the performer on stage for the continuation of the story. The performance starts giving an emphasis on logic, information process and thoughts but as it proceed body takes the first role.
Thematically the performance explores the way we (modern people) make decisions affected by the seemingly million but truly limited choices contemporary society imposes. Audience members are optionally asked to take part in the research (on the decision-making process) by filling in a questionnaire.
This new piece by Tzeni Argyriou is a research that began 4 years ago in Lisbon, within the framework of artists’ exchange scheme Pepinieres Europeennes pour Jeunes Artistes ΜAP XXL. Since then, she has collected visual and audio material, interviews, bibliography on the topic of decision making process and free will and has experimented on transforming the research into a script and organizing it on stage. Due to it’s nature, the piece will remain constantly under evolvement and each time it will include new elements. Earlier forms have been presented under the title makeup_yourmind at Lugar Comum in Lisbon (2006), at Abbaye de Neumüster Centre Culturel de Rencontre in Luxemburg and at Judson Church of Movement Research in New York (2007) and in Athens at Sarantopoulos Mills (2009). Dr.Maybe Darling as a complete performance was premiered in Benaki Museum in 2010. After that Dr.Maybe Darling was selected by the Hellenic center of the ITI to be part of the electronic theatre and dance platform Athens System 2011.
Conceived / Created / Performed by Tzeni Argyriou
Performing Alter Ego: Siamou Stavroula
The performance also includes interviews by:
Kouvelas Ilias - Emeritus Professor at the School of Medicine,
Baltas Aristidis - Professor of Philosophy of Science,
Tzavaras Thanassis - Psychiatrist / Psychoanalyst.
Video: Sotiriou Lila
Concept Assistance: Siamou Stavroula, Varsami Andromachi
Original music and live processing: Poulios Giorgos
Lighting: Mihopoulos Thodoros
Stage and Costume design: Delidimos Christos, Makarouni Despoina
Video coordination: Tsagarakis Panos
BRAINTRACE software: Makris Nikos
Assistant producer: Argyriou Maria
Graphic design: Antidot design Studio
Translation: Anna Iakovidou

Baby and Me - Evian Commercial

Days After Those Days ++

The Scene From "Monster In Paris"