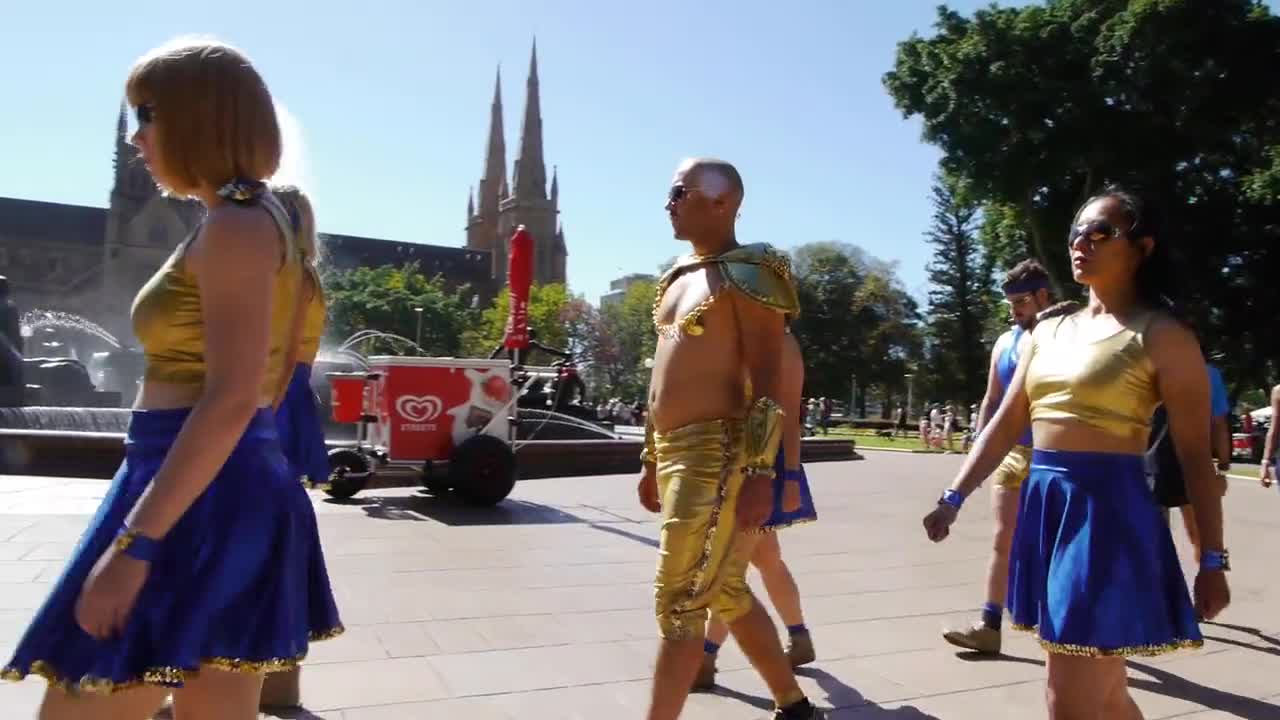 All The Queens' Men
allthequeensmen.net
Fun Run. Created by Tristan Meecham
Artistic and Production Team: Tristan Meecham, Bec Reid, Willoh S Weiland, Lara Thoms, Martyn Coutts, Liz Dunn, Luke Smiles, Lauren Beck, Jarrod Factor, Emily O Brien, Freya Waterson
Fun Run Performers: Tristan Meecham, Bec Reid, Mike Steel, Zoe Coombs Marr, James Shannon, Kyle Kremerskothen, Jacinda Richards, Jess Devereaux, Julia Mardjuki, Holly Durant, Lee Serle, Jullian Crotti.
Community Performers: Hump's Athenian Army, Balance and UTS Tri Club, Physique Aerobics, Marching Koalas, Northern Beaches Gymstars, Northbridge Knockouts, Harbour City Bears, CFC Fitness Fusion, The Running Company, Salsa Republic, Team Mojo, Sydney Roller Derby League, Crossfit Bondi and CBPT Gym.
Produced By Freya Waterson.
When the Greek messenger Pheidippides was sent to Athens to announce the Persian’s defeat in the battle of Marathon, he ran the entire distance without stopping, burst into the Athenian assembly and died on the spot. FUN RUN is his story…
FUN RUN is not merely homage to Pheidippides, but a riotous spectacle that pushes the limits of endurance. Humphrey, the fearless hero in tight packed lycra shorts and nipple pasties, runs a gruelling 42kms on a treadmill supported by massive visual effects,a booming soundtrack, a silky-voiced MC and hundreds of performers and athletes from the wider local community. Join the fun and cheer on our running man Humphrey. Will he hit the wall or complete his quest?
FUN RUN is a huge free event for the whole family that really has it all – bouncing pom-poms, bulging muscles, cyclist’s calves and even a flash mob that will have everyone moving.
"And it was fun. What fun. You could hear it from blocks away. But what made this event so curiously subversive was the lack of cues that clued us in that it was Art. Countless passersby wondered what they were watching – a charity event? A corporate stunt? A sporting spectacle? It was all of these things, kind of, or parodies of each. It definitely involved the city in a truly remarkable way, and as the sun set and the runner entered the final leg of the race the atmosphere was electric among onlookers still none the wiser as to why they were even there. A gold medal affair." - John Bailey, The Age Newspaper, Australia