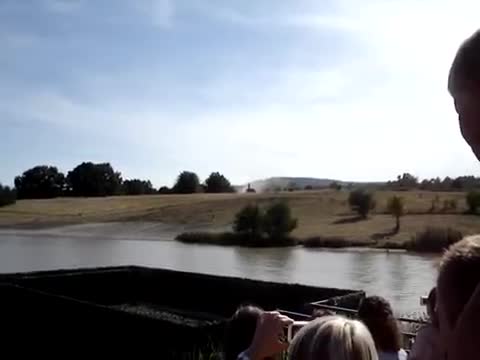 German Tanks Leopard 2A5 Show Deep Wading
Click here to play the animation
Link to Page
Close
Did you know there is a Y8 Forum?
Join other players talking about games

Two German Army tanks Leopard 2A5 (393rd Armoured Battalion) demonstrate deep wading.
Deep wading or deep fording is a technique used by some heavy amphibious vehicles to traverse water that is no more than a few metres deep - the vehicle drives on the riverbed/lakebed/seabed and uses screens or a pipe (a snorkel) that reaches above the water surface for an air supply. The technique has been used by armoured military vehicles such as tanks.

In contrast, lighter amphibious vehicles that float on the water surface are not limited by the depth of the water.
"Leopard 2 Improved" was a prototype-series for enhancing the A4, introducing a wedge-shaped, spaced add-on armour to the turret front and the frontal area of the sides. These spaced armour modules defeat a hollow charge prior to reaching the base armour, and causes kinetic-energy penetrators to change direction, eroding them in the process; it does not form a shot-trap, since it does not deflect the penetrators outwards to hit the hull or turret ring. The gun mantlet was redesigned to accept the new armour.

The Leopard 2 Imp was then developed into the A5. There were also some improvements in the main armour composition. The interior received spall liners to reduce fragments if the armour is penetrated. The frontal "heavy" third of the side skirts was replaced with a stronger type. The commander's sight was moved to a new position behind the hatch and it received an independent thermal channel. The gunner's sight was moved to the turret roof as opposed to the cavity in the front armour in previous models. A heavier sliding driver's hatch was fitted. Turret controls went all-electric, increasing reliability and crew safety, as well as weight savings. The gun braking system was improved to prepare for the later mounting of the new L55 gun tube and to enable firing of more powerful ammunition, such as the DM-53 APFSDS. The A5 entered service in German tank battalions in mid-1998.

The Leopard 2(S) is a Swedish Army variant of the Leopard 2 Imp, which has received the local designation Stridsvagn 122. It is based on what was then called "Leopard 2 Improved" and features increased armour on the turret top and front hull, and improved command, control and fire control systems. Externally, the vehicle can be distinguished from the Leopard 2A5 by the French GALIX smoke dispensers, different storage bins, and the much thicker crew hatches.[19] The Strv 122B, a variant equipped with modular AMAP composite armour from IBD Deisenroth, has increased 360° protection against threats like EFPs, RPGs and IEDs.[60] The width of exactly 4 metres (13 ft) has been kept, while the weight increases by only 350 kilograms (770 lb).[60]

The Best Of Halloween Decorations