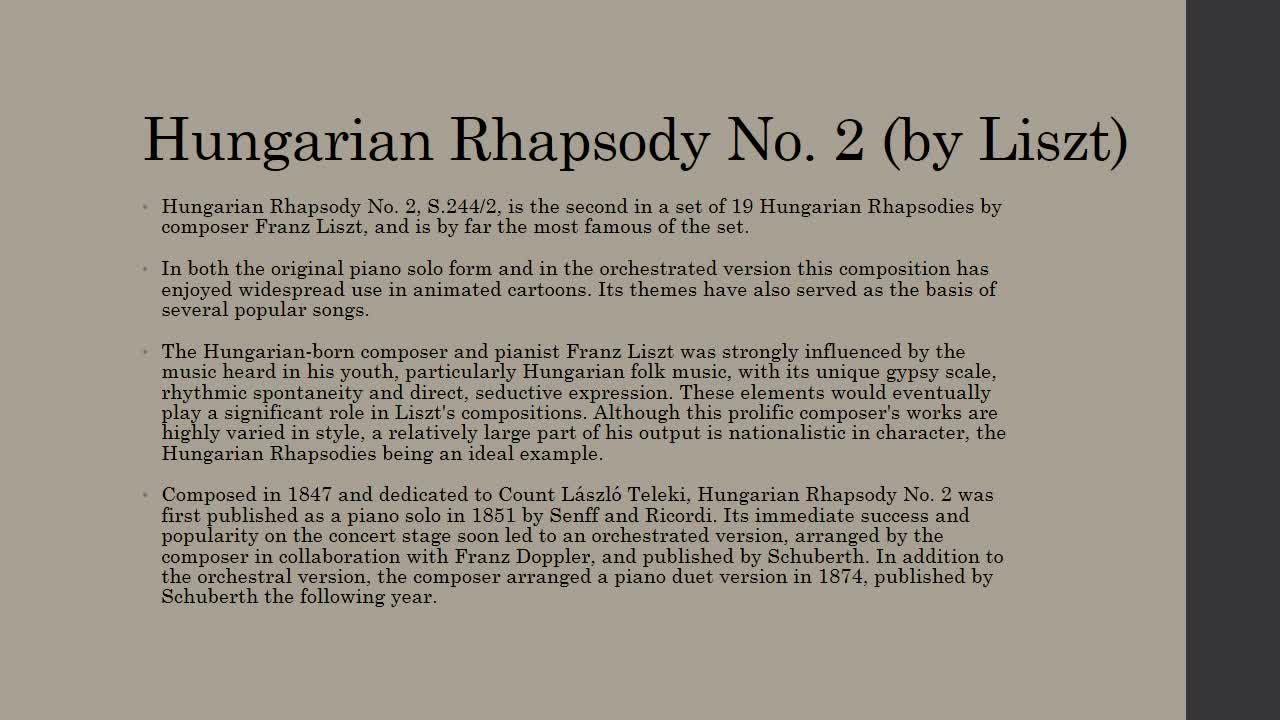 Hungarian Rhapsody No 2
Click here to play the animation
Link to Page
Close
Did you know there is a Y8 Forum?
Join other players talking about games

In both the original piano solo form and in the orchestrated version this composition has enjoyed widespread use in animated cartoons. Its themes have also served as the basis of several popular songs.

The Hungarian-born composer and pianist Franz Liszt was strongly influenced by the music heard in his youth, particularly Hungarian folk music, with its unique gypsy scale, rhythmic spontaneity and direct, seductive expression. These elements would eventually play a significant role in Liszt's compositions. Although this prolific composer's works are highly varied in style, a relatively large part of his output is nationalistic in character, the Hungarian Rhapsodies being an ideal example.

Composed in 1847 and dedicated to Count László Teleki, Hungarian Rhapsody No. 2 was first published as a piano solo in 1851 by Senff and Ricordi. Its immediate success and popularity on the concert stage soon led to an orchestrated version, arranged by the composer in collaboration with Franz Doppler, and published by Schuberth. In addition to the orchestral version, the composer arranged a piano duet version in 1874, published by Schuberth the following year.

By the late 19th century and early 20th century, the excruciating technical challenges of the piano solo version led to its acceptance as the "unofficial standard" by which every notable pianist would "prove his salt", usually as a smashing finale.[citation needed] It had become an expected staple of virtually every performance of the greatest pianists of the time. Offering an outstanding contrast to the serious and dramatic lassan, the following friska holds enormous appeal for audiences, with its simple alternating tonic and dominant harmonization, its energetic, toe-tapping rhythms, and breath-taking "pianistics".

Most unusual in this composition is the composer's invitation for the performer to perform a cadenza, although most pianists choose to decline the invitation. In 1997 Marc-André Hamelin performed a cadenza that has since become famous for its originality, musicality and playfulness, and Sergei Rachmaninoff also wrote a famous cadenza for his interpretation. Liszt himself wrote several cadenzas for the piece, but these are rarely performed. Other pianists have arranged their own versions of the Rhapsody with changes beyond that of simply adding a cadenza, most notably Vladimir Horowitz in 1953.

Funtimes at the Forums