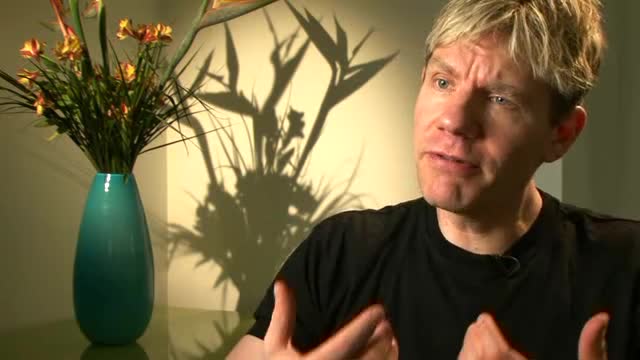 When we look into the future and talk about how we're going to make this world a more sustainable one, there is a lot of focus on changing individual behaviour: Don't drive a car so much, don't eat so much meat, don't do this and that. I honestly think we've seen for a very long time that that kind of argument doesn't work. People will do it a little bit, and that's great, by all means do it. But this is not about shaming people into doing things that they like to do. This is about making the technology available so that we can do all the great things, but actually be more sustainable.
In the BBC News Night they actually asked one of their top reporters to be Ethical Man for a year. He was going to cut his family's carbon emissions: he insulated their house, which was probably smart, sold his car, which turned out to give a lot of problems, didn't go on any holidays, looked into ecological burial, all kinds of stuff. He was pretty harsh. By the end of that one year, he had reduced his carbon emissions by 20 per cent. Which, if everyone in Britain had done that, would have postponed global warming by about half a second. So, you know, not a whole lot of things, but it took a lot of effort. But what was his first reaction after he was done doing this? Well, he was actually very honest and said: "I bought tickets for the whole family to Jamaica." And instantly, he blew the entire savings.
I think this idea of doing good and then binging afterwards is a little bit like dieting: You only eat celery for a while and then you binge out on cakes. It's not the way forward. Telling people: “No, you can't do this,” is never really going to win any converts, it's just going to make everybody very, very tired. This is about coming up with the innovations that will make it possible for us to have all these great things, to fly to Jamaica, but to do so on a plane that will ultimately be powered by non CO2-emitting fuels.