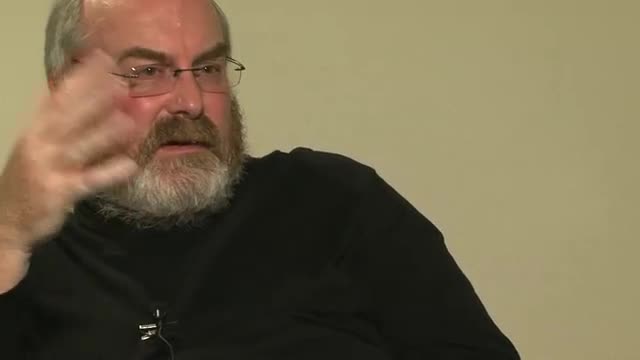 If you look at the history of management science - I mean, I lived through the tail-end of one paradigm all the way through the last and I'm hopefully at the start of a third - what you see happens is, three things come together to achieve a paradigm shift. They create the preconditions, you can't guarantee one, but without these three it won't happen. One is you get a new concept or a new idea. The second is you get a radical new technology. And the third is you get a recession, because what a recession does is it prevents the old things working any more. People just haven't got the cash. So they will, to quote Lincoln, think anew, act anew.
So if you look at it, round about the 1920s is where management science takes off. The new concept is that there is such a thing as management science, links with Drucker and Taylor and people like that. The new technology is communication. Until the 1920s we couldn't communicate effectively internationally. And of course, we get a major recession. So from that we get the huge growth of manufacturing industry with its focus on mass commoditization, effectively.
In the eighties we get another one. Big recession. New academic concept: systems thinking. It comes in, really, with Forrester, Beck and Beer in the sixties or seventies. But it gets popularized in the eighties by Peter Senge, Hammer and Champy, Kaplan and Naughton, all of these popular figures. And basically that says: Hang on a minute, this is all too difficult. The world isn't as simple as core manufacturing says, but the way we'll handle everything is by defining outcomes, and we engineer for outcomes. So we handle uncertainty by saying where we want to be. We also here get the three-year plan, the five-year plan come in at this point. The same sort of principle.
And that's lasted for a long period of time. What's interesting is, towards the end of a paradigm people take it to excess. So Six Sigma is an example of business process reengineering taken to excess. In fact, I normally called it 'sick stigma'. And there's nothing you can legitimately do with Six Sigma you can't do better with a cheaper BPR process. And if you look at the cases, 3M abandoned it completely in research because it was destroying their capacity to innovate. And it's the classic approach. Something that works within a closed manufacturing system won't work in an open system. But that happens at the end of a paradigm, it gets more extreme.
What we now see is another of these paradigm shifts. We've got a major recession again. The technology shift which gave rise to systems thinking was scalable computing, or affordable computing. We've now got the internet, which is completely different, that's pervasive computing. That is a massive shift. Everybody has computing embedded in things. We take it for granted. And we've also got this new theory, complexity science, which we understand for the first time. So I think that's creating a massive shift. The problem we've got is, systems-thinking people start to use complexity language. They don't understand the difference. And actually a complex system genuinely is a non-causal system, i.e. there isn't a predictable relationship between cause and effect, so we have to act in the present. We measure complex systems by measuring impact, not by measuring outcome, i.e. we can't determine in advance what a good outcome will be, but we measure total impact, which is where techniques like narrative come into their own, if they're used scientifically.
So I think complexity is a paradigm shift. I think we'll see systems thinking hanging on for a bit, but we've reached the maximum utility we can have because systems thinking works with complicated systems. Its dominant metaphor is engineering. It can't handle the fluidity of complexity.