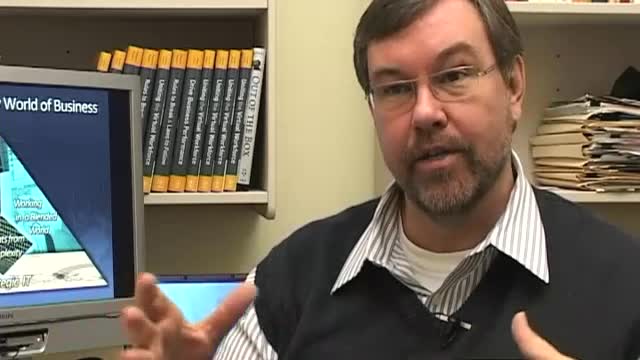 I think the future of software is determined for a short period of time, because Microsoft, as with other software vendors, have a roadmap and where we’re taking products. So you’re going to see a continued evolution of things like Windows and Microsoft Office, and you’re going to see, as we’ve seen recently, en evolution of things like Excel, where it’s now not just a spreadsheet that’s on your desktop, but it’s a service. So we’re going to see this growth of services being available both through cell phones, through web browsers and through pc’s and web browsers, as well as other kind of enterprise level software, including line of business applications like SAP. You will see services that come out of those and increasingly that is the kind of interaction that you will have, that will be a combination of client software and services that are available. And that has a number of advantages in terms of where business is going to take it, because I think business people are looking at: How do we minimize the cost of information technology and some of those things that are now repetitive, like running our e-mail centre. Can we create e-mail as a service and outsource that, to allow us to concentrate on where software really drives competitive differentiation? And I think that is one of the things that I talk to businesses about a lot, is how do they align their business strategy with their IT investments? And I think that’s going to drive where we take software in the future as well. But there’s this whole, once we get past the 2, 3, 5-year planning horizon that we have, that there are a lot of investments that we’re making and that are being made in the market, through Microsoft Research and our Office Labs-team and other places, where we have aspirations about where we may take software. But we don’t know how the complementary technologies are going to evolve. We don’t necessarily know if consumers are going to like our ideas. So we have to test them and play with them in the market-place to see how they’re going to work out, how they integrate with other technologies, what’s going on in the market around them. And so once we get past that kind of finite timeframe, where we kind of know what’s going to ship, it becomes a little less certain about where it’s going to go. But that’s one of the areas where we kind of think about us co-creating the future, because we’re making those investments in order to really kind of help understand what’s going to come next.