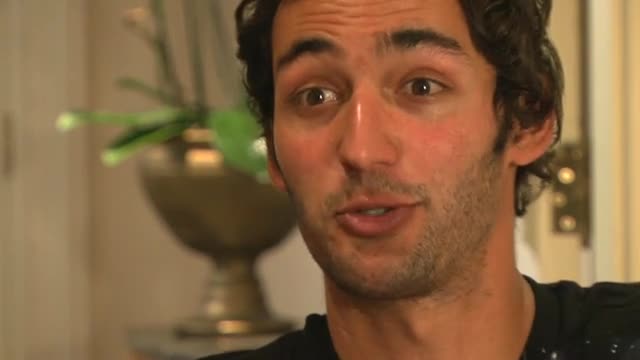 Edward O. Wilson who wrote 'Consilience', which is like the merger of biology, physics, art and everything into one thing, he says that man has decommissioned natural selection. And he says: Now we need to look deep within ourselves and decide what we wish to become. Having invented the gods, we can turn into them. And I think we are seeing it happen. I think we saw it happen, I think if you were to paint... if you were to draw like Leonardo's Vitruvian Man today, the Vitruvian Man, and if you would paint little diagrams and say: Okay, this is his opposable thumb, this is his frontal lobe, I think that he would have in his hand maybe an iPhone or a smartphone, and there would be a diagram and it would refer to that as his extended mind. And we need to get over our skin bag bias, which is this assumption that what we are is natural and organic and what we make is somehow inorganic or unnatural. I think that what we make is birthed out of nature. It is who and what we are. So I think our tools increasingly are outsourcing cognition, outgrowth of the mind, and so when I say 'playing jazz with the universe' it's just like we are waiting for the cosmos to know itself, our increasingly powerful tools are a way for evolution itself to reverse engineer itself. Evolution has evolved its own evolvability. So by exploring new possibilities and exploring new options and new niches, what are we going to make? What are these tools going to allow to unfold through their prism? Just like the harpsichord and the technology of the instrument allowed Beethoven and Mozart, the technology of the oil painting allowed Van Gogh, the technology of the alphabet allowed Shakespeare. What is the technology of biology going to do with that? What new artistry are we going to make with the substance of life itself? And with nanotechnology, what new art are we going to make when we can manipulate matter at the level of atoms? We can turn dog shit into pearls. We can turn anything into anything. I mean, it's like in the movies, except it's real. Shrinking the buffer time between what we can imagine and what we can create, we have a universe that will realize itself at the speed of our thought. Imagine that. It's amazing. It's like a psychedelic trip. The word psychedelic means 'manifest of the mind'. So it's no inaccurate to call technologies psychedelics. An article called Google the first psychedelically informed superpower, because the vision of psychedelia was always: We are all connected, we are all one. And the literalisation of that interconnectivity is the Internet. It is Google.

Stanford School of Education on K12IRC

Getting Teachers to Talk Tech