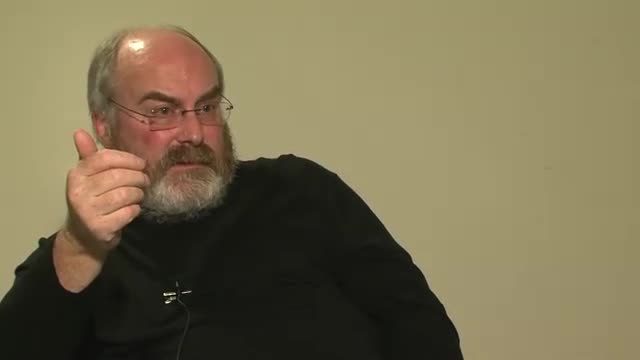 Snowden: Scientific use of narratives

Snowden: Scientific use of narratives
Click here to play the animation
Link to Page
Close

We make a strong distinction between the organizational storytelling movement and the scientific use of narrative. And there are several reasons for that. One is, I'm very concerned about some of the ethics of organizational storytelling. But I'm also concerned about the effectiveness. In day-to-day life people don't tell stories. What they do is, they exchange anecdotes, it's small and fragmented and it's the water cooler conversation that counts.
Now, lots of us now use the phrase 'homo narrans' rather than 'homo sapiens'. We're the storytelling apes. And it turns out narrative is key to our evolutionary history, because we were the first animals to actually construct metaphorical based languages, as a result of which we can swap knowledge through stories. So we're not dependent on imitation of parents or evolution to achieve change. That's how human intelligence goes through an exponential growth.
Round about 200,000 years ago, when language comes in, all of a sudden the human race moves from being a minor to a major player in that sort of sense. So the way we make decisions is actually through micro-narratives. So if you look at the
cultural difference between the US and Europe... I got into trouble in the States last year for upsetting a whole bunch of Democrats by saying: Look, from a UK perspective you guys are the left wing of our right-wing party and the Republican ones are the right wing of our right-wing party. You haven't got a liberal party, you haven't got a labour party, you haven't got a socialist party, because you wiped them out in the 1920s, and you haven't got any communist party. So you're working with a very narrow range.
And the reason is not genetic, because we have the same genetic history. The reason is, the dominant narratives of the society in which you grew up constrain the way you see the world. So some of the work I do for the American government, for example, is actually to get to see the world from other perspectives. And you do that by mapping the micro-narratives of those cultures. So it's the narratives of the water cooler, the supermarket queue, the social club, it's the day-to-day narratives of people already in existence which actually give you a new research tool.
So our approach is quite simple. We get people to tell their stories. That's not difficult to do. We use school children as field ethnographers, we create websites. We did one recently for Philips Lighting, for example, where we gathered stories about people's gardens. And basically one euro was given for every story to a tree planting trust. That got a huge amount of material very quickly. So it's not difficult. But the key thing is, people interpret their own narrative. So we don't have academics or computers interpreting it.
We create a structure based on the field we're working in, maybe a geometric or a graphical shape. We've got one running in Australia, for example, where we got a snake, because that's the one common image in aboriginal legends, and children place their story on the snake to indicate where it sits in their life journey, and then they can change the colour or the size of the scales. In Europe we use a lot of triangles with three qualities on them. So, for example, if I'm doing an audit on leadership, I might gather stories about leadership or even get people to identify a YouTube video which indicates the leadership culture in their company. We're doing one of those at the moment and Monty Python and The Office are featuring highly. But then they place it, for example, on a triangle, which has labels 'altruistic', 'assertive', 'analytical', which are three qualities of leadership. We don't say what's a good leader or a bad leader. Where would you place it on that? Now, of course, for every triangle, and we might use eight or nine in the project, we get three 0 to 100 percent scales. So what we've got is quantitative data generated by the originators of the story, which always links back in with the original narrative. Now that's powerful, because what you've got is a qualitative and quantitative technique in one. Now, a lot of social science researchers don't get this because they're used to inductive processes. This, to use the language of philosophy, is an abductive process. It's using technology to support the human ability to have hunches or insights and then test them for coherence.

Sandberg: Audience as a character in the show