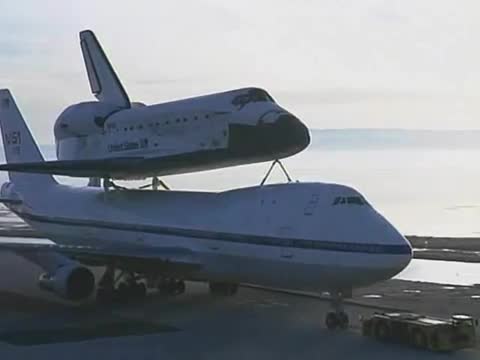 Space Shuttle Carrier Aircraft Takeoff and Landing
Click here to play the animation
Link to Page
Close
Did you know there is a Y8 Forum?
Join other players talking about games

This 31 second movie clip shows a takeoff and landing of the 747 Shuttle Carrier Aircraft.

The 747 series of aircraft are four-engine intercontinental-range swept-wing "jumbo jets" that entered commercial service in 1969.

The SCAs are used to ferry space shuttle orbiters from landing sites back to the launch complex at the Kennedy Space Center, and also to and from other locations too distant for the orbiters to be delivered by ground transportation.

The orbiters are placed atop the SCAs by Mate-Demate Devices, large gantry-like structures which hoist the orbiters off the ground for post-flight servicing, and then mate them with the SCAs for ferry flights.

Features which distinguish the two SCAs from standard 747 jetliners are:

-Three struts, with associated interior structural strengthening, protruding from the top of the fuselage (two aft, one forward) on which the orbiter is attached

-Two additional vertical stabilizers, one on each end of the standard horizontal stabilizer, to enhance directional stability

-Removal of all interior furnishings and equipment aft of the forward No. 1 doors

Instrumentation used by SCA flight crews and engineers to monitor orbiter electrical loads during the ferry flights and also during pre- and post-ferry flight operations.