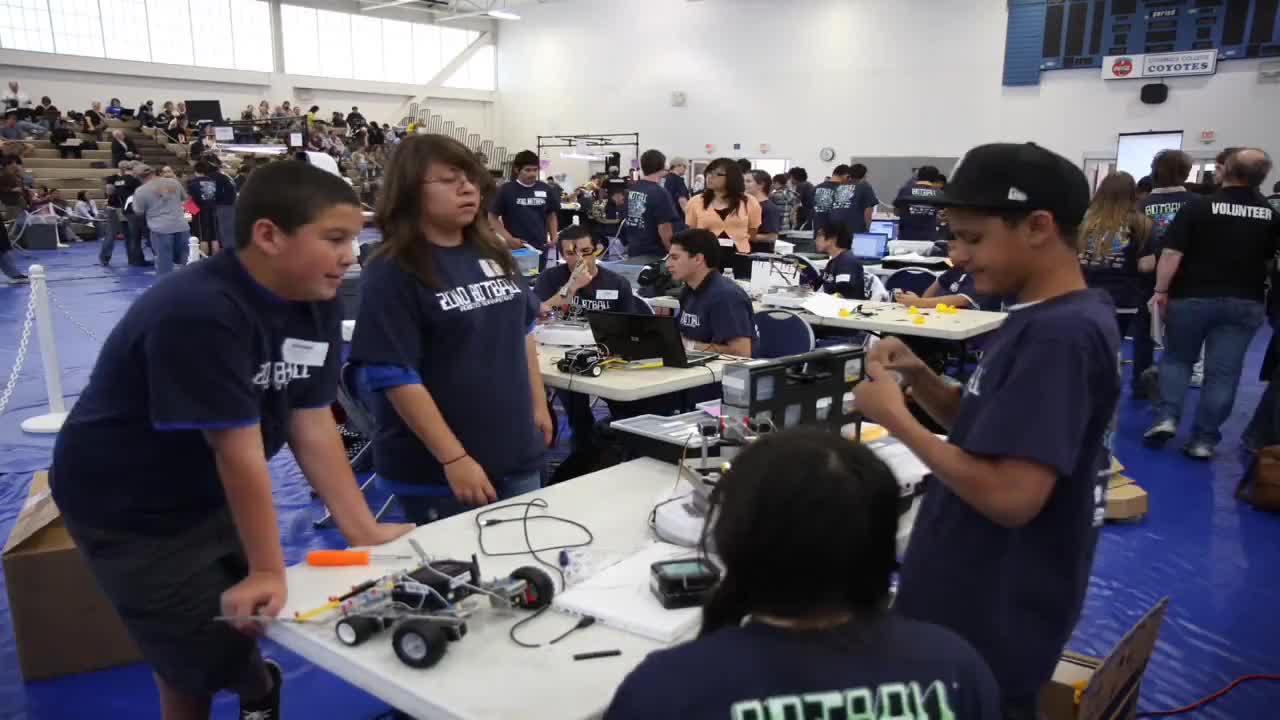 Botball is a national educational robotics competition for middle and high school students. Our documentary, conceptualized in the tradition of the film “Spellbound” which followed eight teenagers on their quest to win the 1999 national spelling bee, will inspire public interest in robotics and is a fantastic way to enhance understanding and broaden awareness of this unsung program. We have entered into a partnership with the KISS Institute for Practical Robotics (KIPR), the non-profit organizers of the Botball program, and have obtained exclusive rights to tell their story.
Based on national science education standards, Botball develops an excitement for knowledge and engages practical understanding through hands-on experience with science, technology, engineering, and math (STEM) educational principles. Each year, small teams of students design, build, and program autonomous robots. Botball stands apart from other robotics programs because the students must pre-program their robots using “C,” the most widely used programming language in industry and academia, rather than using a remote control. Programs like Botball are especially critical in light of current studies showing the United States falling far behind other developed countries in math and science test results. By exposing students to an inquiry-based, learn-by-doing activity that appeals to their hearts as well as their minds, Botball addresses our nation’s need for a well-prepared and creative workforce with experience in leadership and teamwork.
Our plan is to tell the story of the complete 2011 Botball cycle, from game development all the way through the national competition in Anaheim, California in July. Using the thrill of competition as a narrative focal point, we intend to follow a number of Botball teams (six to ten depending on the amount of funding raised) as they develop their robots and prepare to compete. Middle and high school students and their faculty mentors will tell their own stories, and we intend to include students from a wide range of cultural, socioeconomic, and geographic backgrounds. Character-based stories give people with varied perspectives a shared experience. With the worldwide audience more film-literate than ever, it is often images and sound that are most effective in educating people. A documentary project showing the experiences of real people will help viewers better understand the Botball program, the excitement of those who participate in it, its educational benefits, and the benefits for society at large.
The documentary is being produced as a non-profit project under the leadership of Loyola Marymount University Professor Gregory Ruzzin. An award-winning film director who teaches narrative and documentary directing in the School of Film and Television at L.M.U., Professor Ruzzin brings with him the support of a comprehensive university. Loyola’s in-kind donation of equipment, facilities, and administrative services greatly enhances project outcomes and assures that the film will be completed. Ruzzin’s L.M.U. association also gives the team access to expert colleagues in the areas of education, computer science, and engineering.
Alongside Professor Ruzzin, co-producer Vicki Curry brings twenty years of professional experience to the project. She has received four Emmy awards, six Golden Mike awards, an Associated Press award, and a Southern California Journalism award for her work as a producer at KCET-TV, the major PBS station for greater Los Angeles.
David Garden, co-producer and award-winning cinematographer, brings twenty years of photography experience in the independent, studio, and network television arenas. Recently, he completed work on 89 episodes of the hit mathematics themed TV series “Numbers” for CBS television. His background as an engineer and friendship with a Botball educator launched the documentary project idea.
As co-producers, the three of us share a genuine commitment to STEM education and a lifelong interest in enhancing the public understanding of science and technology. We envision tremendous outreach potential for a Botball documentary and see it as a response to the national “Educate to Innovate” campaign, which “commits to moving our country from the middle to the top of the pack in science and math education over the next decade.”

When Stoppies Are Just Not Enough