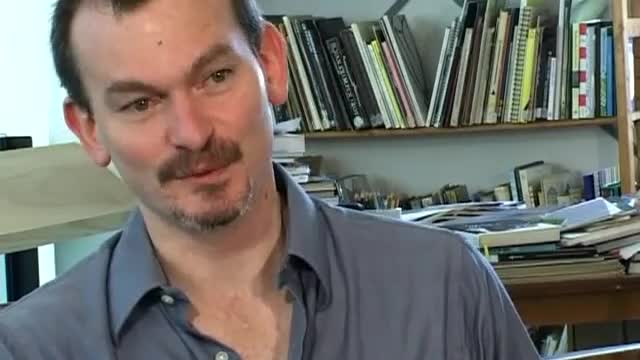 Well, it's a necessary collision. We have one coming very fast for us right now. And that is the explosion of displays that can't be stopped. And the technologies in various different fields are just becoming mature. So we'll get that, but again as I was saying, unless we have some way to intersect that with a new idea of interface and a new idea of what displays are for and how we're going to talk to them. Because it can't be just one way. It can't be output only anymore. You have to have an equally fluid way of communicating back to the machine. Unless we create that collision, then we're going to have a lot of mess.The explosive growth of displays is very nearly upon us. We're going from about a century of fundamentally the same few choices for display. There's certainly print which has been around for half a millennium, and then in the 20th century we had film, moving pictures, we had photography, and we had the CRT and a few variants like projections and flat panel displays. But we're about to cross a line where we have anything from E-ink, a sort of self-reprintable paperlike surfaces, OLED-structures that make flexible displays possible. You can roll them up or pull them down from your wall or make into curtains. Who knows. Weavable fabric type displays that allow the display of information and hopefully also interaction on clothing surfaces or plush toy's surfaces. Who knows. And on and on and on like that, to the point where it really will be again the expectation of people that anything might be a display.I think a bigger immediate question will be: What are you going to put on all those displays? We already have to problem with the single television. You've got a 150 channels of satellite programming and these broadcasters and content providers don't have enough content to provide. You see the same stuff run again and again, and they're clearly desperate for things to say. So that begs the question of how much it's worth saying all the time. But that's another whole philosophical discussion, I think.And there's a second question, which is very important, which is: How are you going to interact with all those displays? We already have typically five to eight remote controls just to deal with one television screen. You've got the DVD-remote, the TV-remote, the stereo-remote, the satellite dish-remote and the TiVo-remote. And that's just for one. If all of your walls and the cover of a matchbook and a cereal box and your appliances are all just trying to scream at you visually at the same time.What remains manageable, again with the current conception of one interface device per display or output object... So we certainly can't have a mouse or a keyboard attached to every microwave-oven and every wall map and every active picture frame. But if there's some kind of lingua franca, if you establish an interface technology and an interface style, let's just say it is going to be a gestural interface for example, that can be shared across many of them. And if you kind of somewhat standardize that language. And if you locate the stuff on the human body, then you have a chance of dealing with everything that's going to pollute your home with visual imagery.

From wastewater to renewable energy