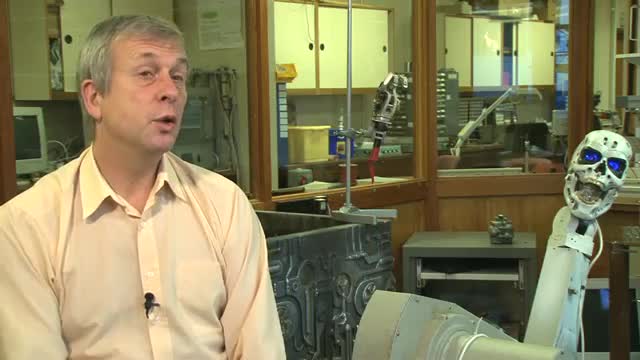 Warwick: History of implants in Warwick

Warwick: History of implants in Warwick
Click here to play the animation
Link to Page
Close

If I go back for myself to 1998, the first implant that I had was just a RFID like a monitoring implant. Now in my building at the University of Reading and various doorways we have got linked up. So what we got it to do was if I walked down the corridor the computer knew it was me, from my implant, and opened doors, switched on lights, said hello, things like that. We were just trying to show how a building could interact with effectively the inside of my body. The implant was in my body. So he knew it was me from the technology and could do things for me, with me. In effect, you, as a person, and the building become a system altogether. So for me it was tremendously exciting. Very simple project and some people 'what did you do that for'. Well, it was partly opening up new possibilities, new ways of thinking about it. And for me it did open up the possibility thereof linking my nervous system, which I did subsequently four years after that, with the other implant. And that was really effecting the technology with what was going on in my body. The first one just said 'I am here' and the technology did things. This one depended on what signals were in my nervous system, therefore in my brain as well, that would effect the technology but also what the technology did effected my brain, to a tremendous extend. So I was able to control little robots, directly from my nervous system, I controlled a wheelchair, just to show what is possible for people with spinal injury. Directly from neural signals I controlled a robot hand, directly from my neural signals, which subsequently John Donahue did in Rhode Island about two years after that, to show exactly the same signals with a patient to control a robot hand. But we had already shown that it was possible. I guess a whole range of... any technology and I also did that from New York. I went to Colombia University, put my nervous system live on the internet and controlled the robot hand back here in the UK. So effectively the robot hand was part of my body but on a different continent. My body was stretched via the internet, which was tremendously exciting, just what that will mean in the future for people. But we can also stimulate my nervous system so we have experimented with extra sensory input or extending the sensory range using ultra sonic signals like some of our robots have here. The biggest thing for me was signals from my wife's nervous system actually effecting my brain, so when she closed her hand, my brain received a pulse. So we did communicate in a very basic way, telegraphically, which for me opened up what will be possible in the future. So I think that each experiment you do, then opens your mind to the possibilities which maybe you do not completely realise until you do it and then say 'oh yeah now we have done that, so that means we can do this as well', which is even more exciting.

Getting Teachers to Talk Tech