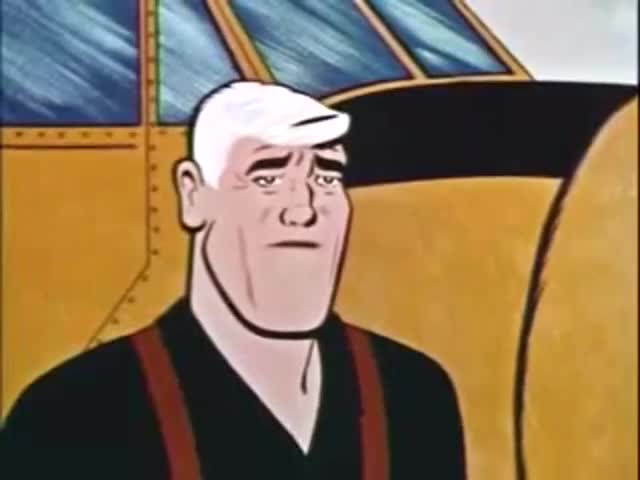 Clutch Cargo was an animated television series produced by Cambria Productions and syndicated beginning on March 9, 1959. Notable for its very limited animation, yet imaginative stories, the series was a surprise hit at the time, and could be seen on 65 stations nationwide in 1960.

The stories centered on Clutch Cargo (voiced by radio actor Richard Cotting), described as "a writer and pilot with a muscular build, a white flat-top hair cut and rugged good looks". As was typical of adventure serials, Clutch Cargo was sent around the world on dangerous assignments. Accompanying him on the assignments were his young ward Spinner and his pet dachshund, Paddlefoot. Actress Margaret Kerry, who provided the look, style, and movement of Tinker Bell in the 1953 Walt Disney Studios production of Peter Pan, provided both the voices and lips of Spinner and Paddlefoot. Live-action footage of an airplane was used as well, specifically that of a rare 1929 Bellanca C-27 Airbus. The attention to detail shown to the aircraft in the series is no doubt due to the fact that the creator of the series, Clark Haas, was a pioneer jet pilot. Hal Smith, who voiced Owl in Disney's Winnie the Pooh series and played Otis Campbell on The Andy Griffith Show, was the voice of Clutch's grizzled, pith-helmeted friend Swampy, as well as numerous other characters.

In all, 52 Clutch Cargo adventures were produced and then serialized in five five-minute chapters each. The first four chapters naturally ended in cliffhangers, with the fifth chapter concluding the adventure. Haas explained the format of the show: "Each story is done in five five-minute segments so the stations can run one a day on weekdays, then recap the whole for a half-hour Saturday show. It's flexible and works very well."

Here in My Head