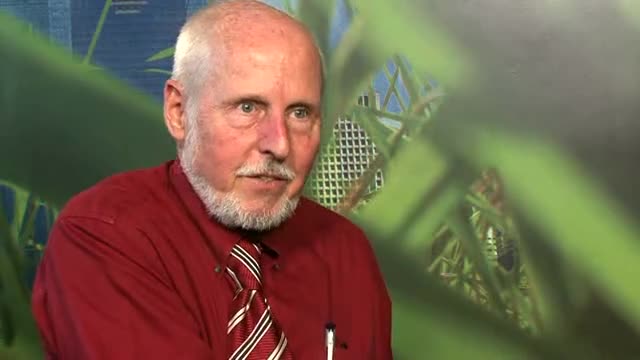 It's about humans being cultural animals. What is different between us and the other animals is, we use language and we invent categories, and then we live inside our language. We live in a meaning system, and our food is part of that meaning system. Yes, it is also energy that we need to eat, but nobody just eats the energy that is around, they eat certain kinds and some of it is good food and some of it is bad food. Everybody culturalizes food, food is very important for people.
Human institutions are all like that: It's the built-in stuff that you take for granted, that's built in in language and culture. Food is part of that, but money is a great example of it. Money is this amazing magic thing that works because we believe in it. And you can tell that it's that way, because sometimes it doesn't work. If they print too much of it or something, then it stops working.
The library is an institution, the university is an institution. These are humanly invented organizational structures and taken-for-granted things that allow us to live in the way that we do. This is what human culture is about: it's the creation of a bunch of stuff, the invention of a bunch of stuff that then becomes almost invisible, because you take it for granted. But it works.
So in the modern world we live in a world which is very institutional, but humans always lived like that. Even nomadic hunter-gatherers lived in an institutional world. The institution they lived in was kinship. But kinship among humans is an institution, it's not really natural. It's what it is defined to be. It's a bunch of words and categories in which I am an uncle or a son or a grandfather or something and that tells me what it is I am supposed to do. I know what a good grandfather is, I'm trying to be a good grandfather, and it's whatever my culture defines a grandfather to be. That's what I'm trying to be.
So kinship is an institution, the economy is a bunch of institutions, the polity is a bunch of institutions, religion is an institution, and this is the world in which we live. What human socio-cultural evolution is, is the change in institutions, but institutions change slowly. But it's mainly social movements that change them. People have a new idea. They usually formulate the new idea as some reshuffle of a bunch of old ideas, and they give it a new label. And then they all run around and do something like the Protestant Reformation and change a bunch of stuff. That is how institutions change, that is how they have always changed. It's not new.
Social movements in that sense have been around all along. They change in other ways. New technologies change institutions, because the institutions have to adapt. If you have a new technology like the internet, people invent ways of dealing with it. You have to protect yourself or you go crazy, you have too much information flow so you have to control it. Everybody has psychological limits, and then we invent ways that help ourselves to do that and then those ways spread. So there is a new institutional adaptation to technology. That has always happened when new technologies come along.
There are other things that change institutions besides social movements, but anyway, they do change and they do evolve. And that's the thing that I study, that evolution.

Short history of mankind - from brain to the heart