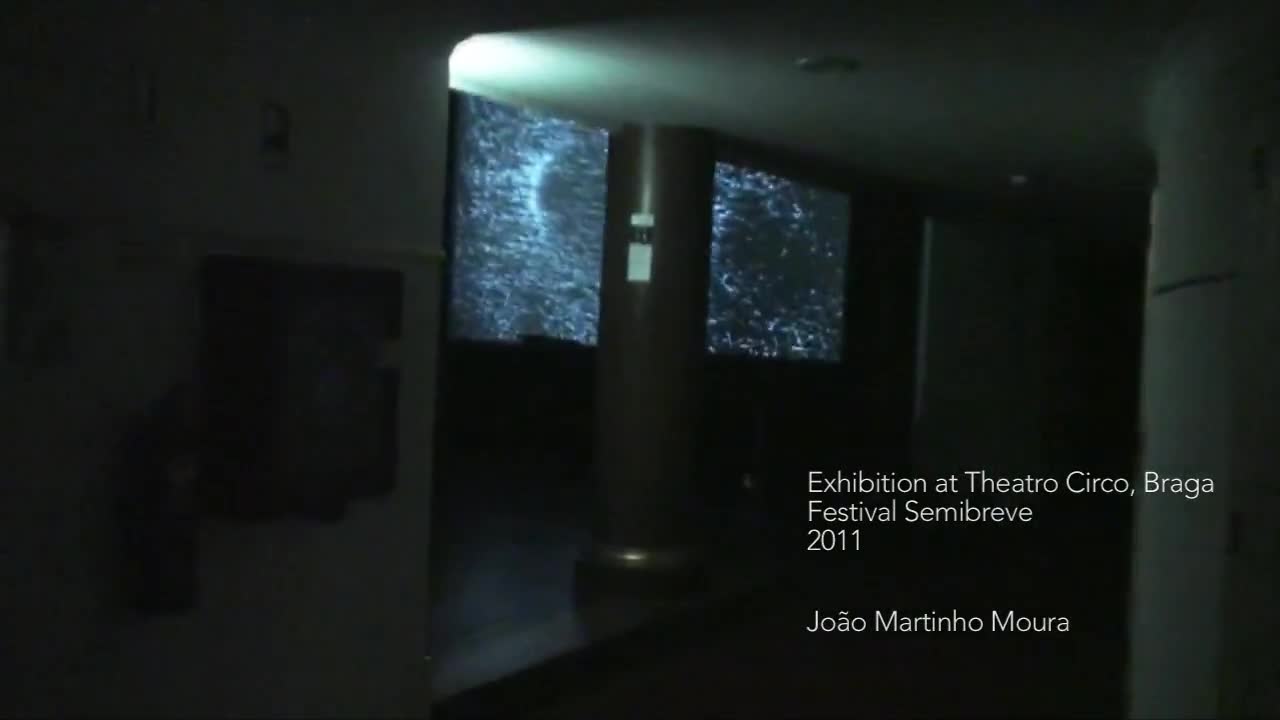 YMYI exhibition at Theatro Circo - Festival Semibreve
Joao Martinho Moura
Braga, Portugal (2011)
João Martinho Moura (jmartinho.net), an Interactive Media Artist and Researcher born in Portugal. He is also an Invited Assistant Professor at the Master Program in Technology and Digital Arts (MTAD), at University of Minho, Portugal, teaching Programing for Digital Arts.
João Martinho Moura has presented his work in conferences around the world, including the International Festival for the Post-Digital Creation Culture OFF (2008), World Congress on Communication and Arts (2010), SHiFT - Social and Human Ideas for Technology (2009), International Symposium on Computational Aesthetics in Graphics, Visualization, and Imaging - CAe (2008), ARTECH (2008), ARTECH (2010), Computer Interaction (2009), Pluto-Festival (2009), ZON Digital Games (2007), International Creative Arts Fair (2008), ZON Multimédia Premium (2008), Le Corps Numérique - Centre Culturel Saint-Exupéry (2011), International Conference on Tangible, Embeded and Embodied Interaction (2011). His work has been shown in a variety of places in Portugal, Brasil, UK, France, Hong Kong and Belgium.
YMYI is an interactive installation, where one is supposed to build up a body language dialogue with an artificial system so as to effectively achieve a synchronized performance between the real user's body and the virtual object itself. The artifact aims at exploring a spatial sphere, where the user/performer is invited to develop his own creative inspiration based on his own body gestures and movements. YMYI was born in the Master in Technology and Digital Arts, University of Minho, in 2007, as the result in research and development in Digital Arts.
The author is grateful to Promais.com for Apple hardware support, and to TFDT.ORG for software and computer coding support.
About Semibreve Festival:
SEMIBREVE Festival is an event focused on the universe of electronic music and digital art. Through a meticulous artist selection and a wary perspective on current research trends, Festival Semibreve intends to spread the state of the art in the field of digital art and to promote performances from some of the most relevant electronic music artists from our time. The first edition of Festival SEMIBREVE took place in Braga (Portugal), from 10 to 13 of November 2011, integrated in the European Youth Capital 2012 programme.
festivalsemibreve.com/
About Theatro Circo:
Theatro Circo, one of the Braga city's highlights. With nearly one hundred years of existence, the building has recently undergone a profound work of restoration and spatial restructuring that modernized keeping its original character and endowed with one of the most advanced technical equipment in Europe. The Theatro Circo is today a reference in the arts, not just for having one of the most charismatic venues of the country but because the choice of their programming meets the criteria of quality and eclectic, reflecting the strategic objectives that were proposed by the majority shareholder to this magnificent space.
theatrocirco.com/
More information and pictures at: projects.jmartinho.net/2332074/YMYI-exhibition-Theatro-Circo-2011-Festival-Semibreve-Joao
twitter.com/jmartinho